The Academy for Eating Disorders (AED) recently held its 25th annual International Conference on Eating Disorders (ICED) in New York, New York from March 14th-16th. The theme of this year’s conference was “Start Spreading the News: Education, Dissemination, and the Science of Eating Disorders,” and the content was aimed at disseminating the clinical and research science of eating disorders more broadly. The conference kicked off with a stimulating keynote address from one of the foremost researchers on suicide, Thomas Joiner, PhD (Florida State University) during which he discussed current epidemiological findings on death by suicide, as well as anecdotal, clinical, and scientific evidence that evaluates a new theory of suicidal behavior. This year’s keynote address was particularly salient as those with eating disorders have a disproportionately high risk for suicide, and thus had direct implications for the clinicians and researchers in attendance.

In keeping with the larger theme of the conference, there were several plenary sessions that were geared toward expanding the reach and/or scope of eating disorders research and clinical interventions. The first plenary session centered around examining the evidence regarding optimal duration for eating disorders treatment. Speakers including Michael Barkham, PhD, Glenn Waller, DPhil, and Ivan Eisler, PhD presented data on brief interventions for eating disorders, and the discussant, Tracey Wade, PhD, helped attendees think through the utility of these interventions and how they might be made available to a greater proportion of the population. Subsequent treatment-focused plenaries highlighted complicated ethical issues involved in compulsory treatment (including a poignant perspective by someone with lived experience compulsory treatment for an eating disorder), as well as an examination of leading-edge therapeutic approaches that leverage novel findings in neuroscience and neurobiology. 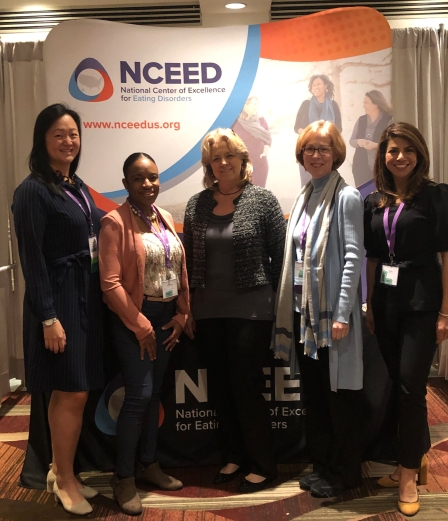 This year’s ICED also provided an avenue for the National Center of Excellence for Eating Disorders (NCEED; based here at UNC) to be introduced to the larger field. With the official launch occurring during National Eating Disorders Awareness Week, the NCEED team took advantage of the growing momentum to exhibit at ICED and promote the Phase I launch.

NCEED also had the opportunity to meet with thought leaders in the eating disorders field by hosting a meeting to seek feedback and guidance on the mission and vision of the program. The meeting brought together leading researchers, clinicians, and advocates so gather a wide range of perspectives. Attendees provided the necessary collective wisdom that will allow NCEED to flourish as a sustainable resource for the larger healthcare field. 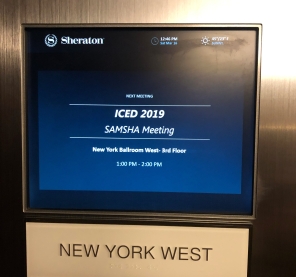 NCEED meeting with thought leaders in the field

Throughout the conference, ICED attendees were exposed to many opportunities to educate themselves and also to network with a community of peers. In addition to the keynote and plenaries, daily workshops and paper/poster sessions offered participants in-depth knowledge on clinical interventions, innovative scientific investigations, and efforts to close the research-practice gap. At times, conversations about the direction of our field in terms of diversity, equity, and inclusion were challenging, but they were an important part of the dialogue and vital to the growth of the organization (i.e., the Academy for Eating Disorders) and the field as a whole. In sum, ICED 2019 was an interactive opportunity to learn, engage in dialogue, and advance the study and treatment of eating disorders. ICED 2020 will take place in Sydney Australia!