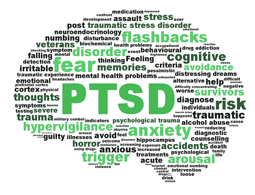 At some point in their lives, many individuals experience or witness a traumatic event, such as a physical or sexual assault, serious car accident, natural disaster, or combat;1 however, most of us know little about common reactions to trauma. Misconceptions about trauma and individuals’ reactions to trauma can unintentionally promote stigma, shame, and misplaced blame, and the most commonly reported reason individuals do not report a trauma or seek treatment is because of fear of stigma, shame, and social rejection.2 Therefore, it is critically important to address these misconceptions. The following are truths about trauma and trauma reactions and helpful information about how and why these reactions occur.

Inability to recall key features of the trauma is a common experience and is a symptom of PTSD.3 Trauma survivors’ memories of the trauma are also often disorganized. During a traumatic event, one’s distress level increases, and the body’s fight, flight, freeze/numb response kicks in to help an individual survive. Several mechanisms that promote self-preservation also interfere with the processing of information that is encoded during times of intense distress.4 This reaction likely serves as a protective response initially but can be prolonged in unhelpful ways due to avoidance of trauma memories and reminders.

Difficulty remembering key features of the event is often distressing and can lead to beliefs like, “I can’t trust myself,” or “I’m going crazy.” Through exposure-based trauma therapies, like prolonged exposure (PE; for more information about PE and other treatments, see link to PTSD treatment blog), fragmentation of memories can be reduced and organization of memory increased.4 This does not mean that survivors are making things up, rather that they are able to gradually approach the memories safely and process them.

Depersonalization is the “persistent or recurrent experiences of feeling detached from, and as if one were an outside observer of, one’s mental processes or body (e.g., feeling as though one were in a dream; feeling a sense of unreality of self or body or of time moving slowly).” Derealization is “persistent or recurrent experiences of unreality of surroundings (e.g., the world around the individual is experienced as unreal, dreamlike, distant, or distorted).” Many people report feeling “out of it” or “in a daze” during and even after the trauma. Both depersonalization and derealization can occur in response to a trauma, and for individuals who experience these symptoms recurrently, they may meet criteria for the diagnosis PTSD with dissociative symptoms.3

Although dissociative symptoms are often distressing, they are common, automatic, and protective responses. They can be reduced through interventions that promote awareness of triggers and use grounding techniques in addition to addressing the trauma directly. Distress tolerance skills, emotional awareness and acceptance, and other mindfulness and grounding skills can be incorporated into trauma-focused treatments for individuals with dissociative symptoms.

Survivors’ self-blame is another frequently experienced reaction to trauma and is a common symptom of PTSD.3 Self-blame functions as an attempt to control what has happened to the individual. It feels uncomfortable to realize that we do not have full control over a situation, so we can trick ourselves into believing that we had control when we really did not. For example, one might think, “If only I had made decision B instead of decision A, then this wouldn’t have happened.” Believing one has control over the situation is more comfortable than acknowledging vulnerability and uncertainty; however, it leads to unwarranted guilt, shame, and self-blame. Also, because of hindsight bias (when people think “I knew that would happen,” or “I should have seen it coming,” because they believe that an event is more predictable after it has already occurred and the outcome is known),5 individuals often think they should have known what would happen and could or should have done something to avoid or escape the situation.

Similarly, when others blame the victim, they reduce their own feelings of vulnerability and uncertainty. We like to think “bad things happen to bad people, and good things happen to good people.” So when bad things happen, we assume it must be for a reason. This belief promotes a comforting, albeit inaccurate, assumption that we should be able to avoid all bad things happening to us. Problematic blame by self and others is also addressed in trauma-focused therapies and can help survivors and loved ones more accurately understand what happened and what was within their power to control. It is important to also address inaccurate blame among healthcare professionals and law enforcement, as many survivors report being blamed or dismissed when disclosing trauma to members of law enforcement, physicians, and therapists.6

Trauma survivors’ reluctance to come forward may be attributed to difficulty processing what happened, self-blame, and systematic problems with how trauma survivors are often treated when they disclose trauma. Many fear that a) they won’t be believed, b) people will see them differently (i.e., “damaged”), c) they may be blamed or ridiculed, or d) that gaps in their memory will be scrutinized and interpreted as lying.

Misconceptions about trauma and trauma reactions add to survivors’ distress levels and interfere with their willingness to seek help and experience benefits of support. Ongoing efforts to decrease stigma and provide accurate information about trauma and common reactions to trauma may help reduce distress among survivors. In addition, it can reduce negative outcomes experienced when trauma survivors do seek support from law enforcement, hospital emergency departments, mental health professionals, and loved ones.