On October 2 at the beautiful Aula Medica on the Solna campus of Karolinska Institutet, we held the first annual eating disorders forum #EDSTHLM17. The afternoon event was hosted by the Centre for Eating Disorders Innovation (CEDI) and the Stockholm Centre for Eating Disorders—the largest eating disorders treatment center in Europe. Our intention was to put together a program that was free and open to the public that appealed to a broad palette of stakeholders including individuals with eating disorders, their carers, clinicians, school nurses, athletes and coaches, healthcare trainees, academic researchers and anyone else interested in the topic. Since this was the first time we tried something like this, we didn’t know what to expect. We tentatively estimated about 400 people would attend, so just asked people to send an email if they were interested. But the emails kept coming in…500…600…700! We started worrying about whether we might hit the maximum the auditorium could hold (1000) so we had to migrate to a ticket system. More importantly, we definitely had to order more food for fika (afternoon snack)! I confess to snickering a little when one of the Aula staff told me that we would never exceed 500 participants. She had no idea how thirsty the public is for information about these illnesses that have been so often maligned and misunderstood.

Our lineup in included Yvonne von Hauswolff-Juhlin, MD, PhD, psychiatrist and Director of SCÄ on practical considerations in treatment of eating disorders; Göran Kenttä, PhD, sports psychologist from the Swedish School of Health and Sport Sciences and head of discipline in sport psychology from the Swedish Sport Federation, on eating disorders in the world of sport; Marit Sahlström, author of “Och runt mig faller världen”  (translation: And the world falls down around me) about her life as a sibling of three sisters with eating disorders; and me (Cynthia Bulik, PhD) on eating disorder research innovations at CEDI and our sister program at the UNC Center of Excellence for Eating Disorders (CEED). The four talks were followed by a panel discussion in which members of the audience could ask questions directly or submit questions via text message to our talented host and emcee Mats Almegård.

All attendees were gifted with a card containing the Academy for Eating Disorders’ Nine Truths About Eating Disorders in Swedish and English. As the day unfolded, each speaker revealed scientific and clinical truths about eating disorders. 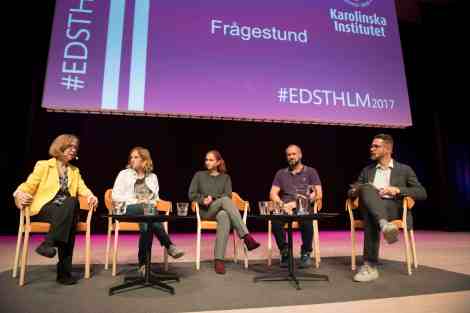 The question and answer period was vigorous and the panel could only scratch the surface of the many important and valuable questions that were posed by members of the audience. The panel took the time after the forum to address the remaining questions and you can access them here Questions and Answers (in a mixture of Swedish and English). If you were unable to attend, the entire forum was filmed by Sveriges Utbildningsradio AB (Swedish Educational Radio) and all of the talks can be viewed here (again in a mixture of Swedish and English).

The enthusiasm for this event highlighted for us that eating disorders are highly relevant from a public health perspective. Over 900 people came out on a windy, rainy autumn day to be educated about eating disorders and to share with us the topics that are important to them. We are reviewing the feedback about the forum now and already planning for #EDSTHLM2018!