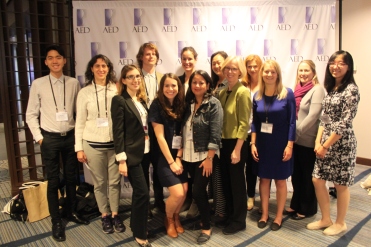 Last week, the Academy for Eating Disorders (AED) held their annual International Conference on Eating Disorders (ICED) in San Francisco, CA. ICED brings together researchers, clinicians, advocates, patients, carers, and other professionals in the eating disorder field. The three-day conference weaves together symposiums and workshops to learn a new clinical or research technique as well as presentations on exciting new research happening in the eating disorders field. Each year a majority of us at CEED attend ICED and I wanted to take this opportunity to highlight some of the research presentations CEED had at this year’s ICED:

Dr. Melissa Munn-Chernoff presented results from a research project she was involved with examining whether anorexia nervosa (AN), major depression, and suicide attempts share genetic and environmental factors. In other words, she assessed whether the same genes and/or environments play a role in the presence of these three factors. Because of the frequent co-occurrence of major depression and suicide attempts in individuals with AN, Dr. Chernoff and colleagues were interested in exploring why this co-occurrence is so frequent. Results showed that indeed shared genetic factors may play a role in the co-occurrence of AN, major depression, and suicide attempts. This underscores the importance of vigilance for signs of suicide when treating individuals with AN.

Dr. Christine Peat presented her work reviewing the effectiveness of psychological treatments for binge eating disorder (BED). Although Dr. Peat strongly emphasized that more studies are needed before we can say what the most effective psychological treatment for BED seems to be, current research suggests that cognitive behavior therapy with a therapist shows the most significant benefits in improving binge eating in comparison with receiving no treatment at all.

Dr. Mae Lynn Reyes-Rodríguez presented results from two research studies this year. First, she presented results from a research study in which she was interested in answering the following question: what is a culturally sensitive nutritional intervention for Latinas living in the U.S., considering their cultural values, food preferences, immigration, and eating patterns across generations? By listening to 50 nutritional sessions between a dietician and a Latina woman with an eating disorder and identifying the themes and patterns discussed in these sessions, Dr. Reyes-Rodríguez identified three key steps that should be part of a nutritional intervention session with Latinas with an eating disorder. These three important steps appear to be: 1) raising awareness of the role of food in their emotional distress; 2) providing psychoeducation of healthy eating pattern using plate method; and 3) developing a meal plan.

Second, Dr. Reyes-Rodríguez described her clinical research study aimed at increasing the engagement of Latino families in eating disorder treatment. To do this, Dr. Reyes-Rodríguez compared two types of eating disorder treatments: 1) individual therapy using cognitive behavioral therapy; or 2) cognitive behavioral therapy plus including family members in treatment. Although there were no significant differences in the effectiveness of these two treatments in terms of decreasing eating disorder symptoms, patients in the treatment group that included family members were less likely to drop out of treatment and showed a decrease in depressive symptoms at the end of treatment and 3-months later. Family inclusion in the treatment of eating disorders in Latinos may require more intensive intervention for effects to be observed.

Dr. Zeynep Yilmaz presented findings from two of her new research projects examining the genetic factors involved in risk for AN. First, Dr. Yilmaz, along with Dr. Stephanie Zerwas, investigated the effects of a genetic risk score (GRS) on risk for AN. GRS represents the [weighted] sum of trait-associated genetic variants observed in an individual. Because a multitude of genes are likely involved in the risk for AN, each playing only a small role, GRS methodology is a way to assess the cumulative impact of many genes on the risk for AN. The study showed that individuals whose AN GRS was in the top 10% (i.e., these individuals had the highest GRS) had notably higher risk for AN compared with individuals whose AN GRS was in the bottom 10% (i.e., these individuals had the lowest GRS), suggesting that the AN GRS could be an important tool in the development of risk prediction models in the future.

Second, Dr. Yilmaz investigated the genes involved in AN within three families, or pedigrees, in which 4-5 family members suffered from AN. This type of genetic study has the potential to identify genes with low frequencies (or genes that are rare) in the population yet play a strong role in risk for AN in a family in which many members have AN. Although the study has not yet identified any rare genetic variants that could be causal to AN in these families, additional analyses are ongoing. However, Dr. Yilmaz did observe that common variation (or genes that are not rare) was an important risk factor for AN. More specifically, affected family members had a higher AN GRS compared with the unaffected family members. These results provide additional evidence that multiple genes play a role in the risk for AN.

Dr. Susan Kleiman (fresh off of receiving her PhD from the Department of Nutrition at UNC) presented two studies on the role of the intestinal microbiota in anorexia nervosa.

Finally, Drs. Cynthia Bulik and Stephanie Zerwas presented in a well-received symposium “Mothers with Eating Disorders and their Children: Building Bridges to the Next Generation.” They were joined by Drs. Rachel Bryant-Waugh, Nadia Micali, and Shiri Sadeh-Sharvit. Dr. Zerwas discussed the roles of both genes and environment in the transmission of eating disorders and Dr. Bulik served as the discussant highlighting the importance of pre- and post-natal intervention in women not just with active eating disorders, but in those who have suffered from eating disorders in the past.

Once again, the UNC/KI team demonstrated both the depth and breadth of our research enterprise. This is just a sample of the wonderful research presented at this year’s ICED conference. For a full list of research presentations, go to: http://www.aedweb.org/index.php/conference/iced-2016