Aside from strengthening the bond of sisterhood, young women of UNC Panhellenic Council hold events throughout the year to benefit the larger community. One of these events, and our favorite of the year, is Greek Groove. Held during the spring semester every year, Greek Groove is an annual dance competition among the Panhellenic sororities in which members from each of the 11 chapters perform original choreography and are judged based on their overall performance, creativity, costume and design, and technicality. Although a dance competition on the surface, Greek Groove has a much greater purpose in mind: to raise funds to support programs in need.

Greek Groove winners receive a portion of the money raised at the event to donate to their individual national philanthropies. However, most of the proceeds go to another UNC-affiliated organization. This year, Greek Groove selected the UNC Center of Excellence for Eating Disorders (CEED) as its beneficiary for the third year in a row, raising an incredible $27,000 for our program.

Proceeds from the event were donated to the CEED to help secure treatment for those suffering from eating disorders, to support research opportunities, and to raise awareness about eating disorders on campus.

The UNC Panhellenic Council made a heartwarming video called “Why I Greek Groove.” The video highlighted personal accounts of what this event and donating to CEED meant to the young women on stage. Among these women were friends of students affected by eating disorders and those who had suffered from eating disorders themselves.

About the event, Morgan Walker, a CEED research assistant, professional dance instructor, and Greek Groove judge this year, commented, “Dance is the body’s greatest celebration of expression, movement, and freedom. Thank you to all the Greek Groove participants for sharing this celebration with us, all while supporting the CEED and those in the community who struggle with eating disorders. You were joys to watch and your continued support is invaluable to us!” 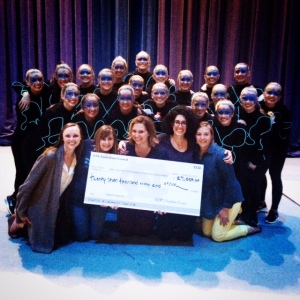