Midlife eating disorders continue to fly under the radar, and it’s a problem! A poor assessment, minimization of symptoms, or failure to refer for treatment after disclosure is still all too common and can have devastating consequences for women and men in midlife suffering from these disorders. A number of articles – >8 in the last year alone – have focused attention on this issue, but the myth that eating disorders only affect teenage girls is hard to erase and continues to plague those with these disorders. Sadly, even today, we hear stories from our more mature patients about negative experiences with the healthcare system, and the adverse effects these experiences had on their eating disorder recovery.

This post highlights just one of those stories. In the form of a written letter to a primary care physician, a woman with midlife onset anorexia nervosa illustrates a disclosure gone awry and educates about eating disorders in women her age. She states that she wants people to know that “eating disorders are devastating, and people at midlife can and do develop them.”

With permission to post her letter here, we have the unique opportunity to learn from her story. “Although I can’t take back what happened to me, by sharing my story, I hope to help prevent this from happening in others down the line,” says this woman who remains actively engaged in outpatient treatment for anorexia. The letter detailing her story is posted below.

Several years have passed, but I will never forget the day that I came to see you for a physical exam. Please bear with me as I tell my story as an example of the importance of primary care in the early detection and treatment of eating disorders among people of all ages.

In 2006 and early 2007, I had lost some 40 percent of my body weight and began seeing a new psychologist for treatment of depression. She immediately diagnosed me with anorexia nervosa, was concerned about my health and urged me to have a physical. A friend referred me to you, and I made an appointment right away. I was 42 at the time, and you told me that it was impossible for me to have anorexia nervosa because I did not have it when I was a teenage girl. Instead, perhaps because I’d worked and traveled in developing countries, you ordered a parasite test. When it came back negative, you did not suggest any follow up.

I did not know what, if anything, was wrong with me, but I became convinced I must not have anorexia. I continued to see the psychologist, but I usually dismissed her concerns about my weight and my physical health because I believed that you would know best. My health (physical and mental) declined, and I was soon hospitalized for depression. After weeks of little progress, the doctor insisted that I go to an inpatient eating disorders program. I turned back to your office to have a hospital-required pre-admission ECG, but while you offered to provide the earlier results, you would not perform the new ECG. I took that as an indication you did not want me for a patient and so I never returned.

Since then, I have been in continuous treatment – inpatient and partial hospitalization on three occasions, but mainly outpatient with a team including a psychologist, registered dietitian, psychiatrist and primary care specialist. Treatment gives hope that I can avoid leaving my 13-year-old daughter motherless, as I was at age 14.

Although it is pointless to spend time thinking about where I would be now had I known I had an eating disorder earlier on, I do know that, according to the National Eating Disorders Association, “early treatment can lead to faster recovery, prevent symptoms from becoming chronic and reduce the likelihood of a fatal outcome.”

I tell you this story not to find fault. I truly believe you are a good doctor, or my trusted friend would not have recommended you. And you were certainly not the only medical professional who, at least in my mind, gave me permission to deny the eating disorder for nearly two years. (My first psychiatrist and therapist largely ignored the weight loss issue, instead focusing solely on the depression that had brought me to them.)

Clearly, there are misconceptions about eating disorders, and I hope that, if you still hold the belief you expressed when I saw you in 2007, you will at least consider anorexia and bulimia as among the many possible diagnoses in older people who have lost significant weight or engage in over exercise, purging or laxative abuse. In recent years, as rising numbers of men and women have developed eating disorders in midlife, an explosion of related research and media coverage have made the phenomenon widely known. But if you haven’t been aware, I encourage you to read the 2013 research report I’ve enclosed. [Included below, Ackard, 2013]. I would feel guilty if I did not bring this to your attention, now that I know about the importance of early detection and treatment and about the widespread nature of these disorders among all types of people at all ages.

Thank you for reading this, and if you have any questions or comments, by all means feel free to contact me, or better yet, a specialist eating disorders program near you. And I wish you all the best as you continue to make a difference in the lives of men and women in our community through your important practice of primary care.

Striving daily for recovery, the writer of this letter is an inspiration. A wife and loving mother of two, science and technology writer, and wickedly skilled crochet enthusiast who finds joy in making blankets, baskets, bags, and more for others, this woman (like so many who fall prey to eating disorders) is a compassionate, caring, and talented woman with extensive wisdom to share. Yet, eating disorders prevent individuals like her from being able to engage in life to the fullest as it takes much time and energy to battle daily the negative thoughts, feelings, and physical sensations that come with the disease. 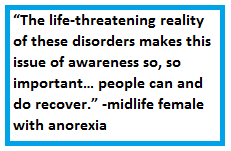 It’s true that we cannot go back and erase what’s happened to her but we can use her story to educate others about eating disorders to prevent a similar occurrence in the future.  As she so importantly notes, “The life-threatening reality of these disorders makes this issue of awareness so, so important — families, friends, patients and medical professionals need to know that these disorders break the stereotypical bounds, and that there is help out there from compassionate specialists and from support groups. And there is hope.” She adds, “While there is no sure cure, people can and do recover.” She is right! With individual and (now) couple-based treatment available to adults with eating disorders, professional treatment is improving and people are recovering.

We urge you to share this story with others to spread the word that eating disorders strike at all ages and to ensure appropriate assessment, timely treatment, and adequate care is given to women and men of all ages suffering from these disorders.

A few resources on eating disorders in midlife are below for your reference: