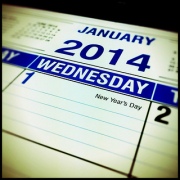 Happy 2014! January is frequently a time of mass self-evaluation and plans for improvement. People take up various commitments to read more, exercise regularly, and eat differently. You or your friends may have even posted resolutions publically to a Facebook page as an attempt to add some accountability. But most often, as the end of the month creeps up, the resolutions of January 1st have been laid aside or thrown away. Worse, is when January 31st rolls around and you take that resolution and use it as a weapon to beat yourself up for not having the “will power” to follow through with the changes you thought you would have accomplished by now. Some people might end up thinking that resolutions are just a waste of time. Why even engage in making changes if you’re only going to end up feeling worse in the end and powerless?

So why don’t we stick to our resolutions? Can what we know about the science of behavior change help? First, you’re going to have to indulge my inner nerd as I tell you all about my new favorite game, Candy Crush. Every December, during the holidays, I find myself drawn to a new iPad game. A couple of years back it was sling-shotting birds with Angry Birds, then I was on a Bejeweled kick for a long time, but this past holiday season will be known in my family as the “Candy Crush Christmas”. For those who have not been indoctrinated to “the Crush”, it’s a puzzle game that’s kind of like Bejeweled in which the purpose is to line up 3 items, or in this case candies. Sounds simple right? But it’s wildly successful. Candy Crush was among the top 3 grossing apps on the iTunes app store last year and people estimate that its parent company, King, earns about $600,000-900,000 per day, from people playing the game. Let that sink in for a moment because that is a whole lotta candy. Being a psychologist, I couldn’t just sit and enjoy this game as I kept coming back to it over and over again. I had to sit back and reflect on my own behavior. Why is this game so addictive? Why do I continue to play it even now that the holiday is over? Behavior change is so, so hard. We all know that most resolutions end up in the trash by the end of the month. So how did the developers at King hijack my brain so I keep playing this silly game for more hours than I really care to admit?

In short, they are geniuses at using behavior change tools to keep the people who play Candy Crush coming back for more. As psychologists, we’ve known about these principles for years but they’ve really mastered how you apply them to a game. But the cool thing is that you can also use these tools to follow through on your own New Year’s resolutions. A lot of these tools are covered in the terrific popular book The Power of Habit which summarizes the research behind them. I’m not going to delve too deeply into the research side for this post. If you’re interested, you can find more references in the book to back up the science. So, hear it goes, three behavior tools that will help you crush those resolutions:

So that’s it! Keep in mind all of this is easier said than done. If I could figure out how to make behavior change just as addictive as Candy Crush, I’d be pulling in the big bucks and winning a Nobel Prize. Don’t think that it will be on my resolution list any time soon though! Happy New Year and have fun hijacking your own resolutions with Candy Crush principles!