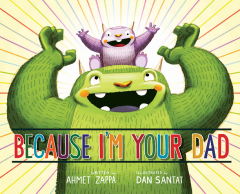 Recently a book caught my eye. The cover included a picture of an imaginary cartoon monster depicting a dad who was carrying his child on his shoulders. The title was: Because I’m Your Dad.

The description of the book says: “In a text that’s both playful and loving, a father expresses his hopes and dreams for a one-of-a-kind relationship with his child. Whimsical monster characters bring the silly and sweet scenes to life and keep the book universal.” (Zappa, 2013). As the dad of a two year old son, I love reading father-son stories, so I took a quick look inside. As an eating disorders researcher, I was especially intrigued by the following lines:

“Because I’m your dad, you can have …
…spaghetti for breakfast,
…French toast for dinner,
… and rocky road ice cream in the bathtub.”

What message was this conveying? On one hand maybe it is a celebration of dads’ unique empathy for the wishes of their children, but on the other hand it seems to turn a complete blind eye to every rule of healthy eating.

How much does this really reflect how dads think about raising their children? How do our partners feel about this?

Children learn a lot through social learning and modeling. I remember concerned looks from the other side of the table (i.e., my wife) when I was eating Ketchup on my Ketchup or Nutella on thin slices of bread (a very common breakfast spread in Germany, the main ingredient is sugar), asking me, “How is this going to work with our children sitting right next to you?”

A recently published study by Mallan et al. surveyed 436 Australian fathers about feeding their pre-school aged children found that the fathers typically ate together with the whole family, and typically ate at the table rather than in front of the TV. So far, so good. But, only about 50% of the fathers reported that they were responsible at least half of the time for organizing meals for their children, deciding what kinds of foods their children would eat, or deciding how much food their children would be offered.

Why are dads so uninvolved? Is this a relic of traditional gender roles of the past? Do mothers hold onto this role due to a protective instinct? Or are there other forces at play?

Over two-thirds of the fathers in this study were overweight or obese, which could be related to their own unhealthy eating behaviors. Perhaps it was better for moms to be in control; however, data on mothers’ health were not included. We know that parents’ and children’s food preferences and food intake are significantly correlated, so we want a good role model at the helm of the family’s meals.

As your child grows up and you eat together day after day, you quickly realize how important social learning is in the development of healthy eating habits. That’s of course not news. A classic experiment showed the impact of social modeling on preschoolers’ food preferences. Children participated in a study where they were paired with other children who had different food preferences. The children ate together, and after just 4 days, the children showed a significant shift from choosing their preferred food on day 1 to choosing their previously nonpreferred food by day 4 (the food that their paired partner preferred more; Birch 1980).
The take home message for me was that eating together with children is the best reason to develop healthy mealtime habits. This is something that the whole family can rally around and it can turn out to be a win-win-situation for dad too.

By the way. I am not implying that it’s not OK to have spaghetti for breakfast every once in a while!

For an up-to-date review of infants’ and children’s social learning about food see Shutts et al.