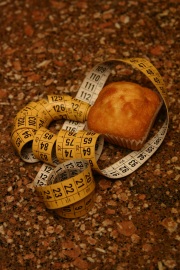 Public health policies have recently been enacted to require nutrition labels and calorie counts on menus in chain restaurant. While many applaud the policies and the attempt to make consumers more aware of what’s really in their food, others fear that such labels could potentially reinforce disordered eating. Estimating the energy and nutritional content of fast food is truly a challenge. Even trained dietitians have difficulty estimating the energy content of foods at chain restaurants (Backstrand et al., 1997). The policies were put in place to assist with portion control and limit overeating, but little is known about the impact of this practice on individuals struggling with an eating disorder or those at risk for developing one.

As a research trainee at both the Duke Diet and Fitness Center and the UNC Center of Excellence for Eating Disorders, I find myself caught in a similar conundrum over menu labeling. Many weight-loss programs encourage participants to use food diaries and electronic fitness apps to track of energy ingested and expended. In contrast, At UNC, we use the exchange system, and lead individuals away from rigid calorie counting. The take home message is that the impact of policy decisions should be thoroughly evaluated prior to, not after roll out. Too often politicians and policy makers find themselves out in front of the research. Policy, like treatment, should be informed by the evidence base.