Patients who enter the eating disorders treatment program at UNC are often prohibited from exercising to prevent further weight loss and to support recovery from their eating disorder. However, a new treatment may help strengthen cognitive abilities by exercising the brain.

Many patients in the inpatient and partial hospitalization programs come to us with a diagnosis of anorexia nervosa. They are severely malnourished as a result of extreme dietary restriction. This malnourishment dramatically impacts cognitive (brain) functioning, which can interfere with decision making about eating, self-esteem, treatment, and recovery. The classic Minnesota Starvation Experiment conducted in 1944 by Ancel Keys documents the alarming impact of starvation on the brain – men in the study reported difficulties in their ability to concentrate and comprehend information, as well as changes in judgment. Although these cognitive changes are now known to be due to the effects of starvation, more recent research suggests that certain cognitive “styles” may actually be associated with development of anorexia and may persist after recovery.

Have you ever looked at a Monet oil painting up close? Most would say it looks like one big mess, but stepping back, it becomes an image representing actual objects and stories. 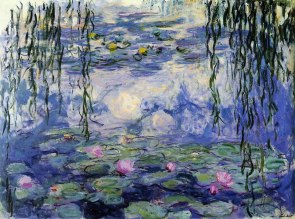 This is an example of central coherence or seeing the forest for the trees. Anorexia nervosa has long been associated with rigidity in both thinking and behavior. Individuals with anorexia are thought to have difficulty seeing the big picture and instead focus intently on details (they may see an avocado as solely a source of fat, rather than a rich source of fiber, potassium, vitamins C, K,  folate, and B6, and heart-healthy unsaturated fat). What about multi-tasking? Have you ever needed to make dinner, take care of your kids, and make a phone call all at the same time? This kind of multi-tasking requires mental flexibility, or what cognitive neuroscientists call set-shifting. People who have anorexia have difficulty shifting sets and may get stuck on an idea, have trouble shifting between ideas, and have difficulty integrating new information, resulting in an inability to modify behavior to match new situations or take new perspectives.

Difficulty with set shifting may be one of the reasons that engaging in treatment can be so challenging for people with anorexia nervosa. Changing routines and thought patterns can negatively influence the relationships with the treatment team and impair motivation for treatment. Rather than facing those challenges head on, cognitive remediation therapy (CRT) was designed to help patients begin to see the forest rather than the trees and be able to shift from tree to tree. CRT is series of cognitive exercises that activate different parts of the brain at once, specifically those parts that are involved in global processing of information and set-shifting. This treatment was first used with patients with traumatic brain injury and later in those with schizophrenia, but it is starting to be used with eating disorders as well. CRT is kind of like a gym for your brain!  It targets the process of thinking (how we think), rather than the content of thoughts (what we think).  Engaging different areas of the brain at once is thought to strengthen existing connections, as well as build new ones.

Try the following exercise for fun:

What do you see? Can you see more than one picture? This is an example of an optical illusion, in which there is more than one image, but one usually stands out. In this picture, if you look carefully, you can see many images. Once you have found them, practice switching back and forth between the different images – how much mental effort does this require?

This type of activity targets both central coherence (seeing the whole picture), as well as set-shifting (in this case, being able to switch mentally from one image to the next). Research suggests that practicing this type of cognitive task among a wide variety of others can actually improve our brain’s capabilities. Given that some studies have found that cognitive impairments can persist even after recovery, interventions like CRT may address a fundamental feature of anorexia that is not addressed in traditional therapies.

At UNC I have had the privilege of helping to start a CRT group in the partial hospitalization program, based on the work of Dr. Kate Tchanturia and colleagues at the Institute of Psychiatry in London, who have found CRT to be useful in both engaging individuals in treatment and addressing the cognitive style of anorexia. In addition to practicing different cognitive tasks, which increase in difficulty over sessions, patients are encouraged to engage in behavioral experiments that involve changing routines, taking new perspectives, and practicing new and uncomfortable behaviors, in hopes that these new experiences will prepare for even greater changes. We know now that the brain is much more capable of growth and change than was once thought. Patients at UNC have expressed interest in learning about their cognitive styles and practicing strengthening brain connections. They enjoy this new way of exercising their brain. We hope to evaluate the effectiveness of this approach in supporting the recovery process and have more to share in the future.

To read more about recent research on CRT see the following: