CEED has been fortunate to have a long history of dedicated research volunteers who have conducted a range of activities to support our research missions. Volunteers have been undergraduate students, post-graduate students, and medical students. Since our founding in 2003, we have had over 90 volunteers, many of whom have gone on to graduate or medical school. I wanted to take a moment to thank them for all their hard work ensuring the success of CEED research projects! We currently have 8 volunteers, and I would like to tell you a little bit about them. 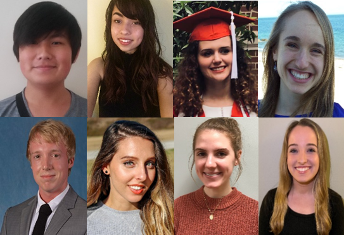 Andy has been with us since January 2017. He is a senior at UNC, double majoring in Biology and Psychology. Andy helps Dr. Stephanie Thomas conduct bench lab work related to microbiome research. In addition, he helps with the Binge Eating Genetics Initiative (BEGIN) study, where he packages and checks research materials. After graduation, Andy plans to attend medical school to become a physician.

Kiara joined CEED in January 2019. She graduated from UNC-Greensboro with a major in Psychology. Kiara works closely with Dr. Jessica Baker on Ovarian Hormone and Reward Challenge Eating Disorder Studies (ORchED Studies). She also assists on the Carolina College Assessment on Research and Education in Science (Carolina CARES) study with survey and data management in Qualtrics. Furthermore, Kiara works at El Futuro, a bilingual mental health clinic as one of the managers. In the near future, Kiara plans to attend graduate school and become a clinical psychologist.

Emily graduated with a B.S. in Nutrition Science from North Carolina State University in May 2019. Since beginning with us in August 2019, she has worked on multiple projects, including the BEGIN and Eating Disorders Genetics Initiative (EDGI) studies, where she assists with participant tracking and communication, mailing study kits, and managing questionnaires through Qualtrics. She has also assisted Drs. Grace Wu and Jessica Baker on a review of published studies about hormones and eating disorders.

Lian is a first-year Master’s in Public Health student at UNC with a concentration in Maternal, Child, and Family Health. She received her Bachelor’s degree in Neuroscience and Global Health in 2015, and has a background in global maternal and newborn health. She joined CEED in September 2019, working on the ORchED Studies with Dr. Jessica Baker. Her primary responsibilities include managing regulatory documents and developing study forms and surveys. Lian is also a trainee with the UNC Maternal and Child Health Center of Excellence, where she assists with research on economic hardship and mental health outcomes in parents. After completing her MPH, Lian plans to pursue a PhD in Clinical Psychology, with a specific focus on eating disorders.

Chris graduated from Davidson College in May 2014 with a B.S. in Physics and German. His is a fourth-year UNC medical student and has been working at CEED since September 2019. Currently, he works on the ORchED Studies doing study screens and study visits. After finishing medical school, Chris plans to apply to residency in Psychiatry.

Chiara obtained her B.A. in Psychology from Elon University in May 2019 and joined CEED in January 2020. She is currently involved with the ORchED Studies, revising Qualtrics surveys, assisting with study recruitment, and conducting literature searches. Furthermore, Chiara works on both the BEGIN and EDGI studies, where she helps revise study questionnaires and pilots the surveys. Eventually, Chiara would like to pursue graduate school and obtain a PhD in Clinical Psychology.

As a sophomore at UNC majoring in Psychology, Maddie joined CEED in January 2020. She currently works with Dr. Hunna Watson assisting with literature reviews on the prevalence of eating disorders, as well as developing data dictionaries and scoring algorithms for BEGIN. Maddie also works in Dr. Mitch Prinstein’s lab in the Department of Psychology and Neuroscience. After graduation, Maddie hopes to obtain a Master’s degree in Social Work to pursue a career in family or couples counseling, with a possible focus on eating disorders.

Katie began volunteering at CEED in January 2020, and she is a junior at UNC majoring in Psychology with a double minor in Education and Health and Society. She also works in Dr. Anna Bardone-Cone’s lab in the Department of Psychology and Neuroscience. Currently, Katie works on the BEGIN and EDGI studies, where her responsibilities include helping revise and implement standardized participant contact protocols, and she assists Dr. Melissa Munn-Chernoff on tasks related to research on the co-occurrence of eating disorders and substance use disorders. Upon graduation, Katie would like to apply to graduate school, where she plans to further develop her research skills and build expertise as a clinical psychologist who specializes in helping children and adolescents.

We are excited you are at CEED and have enjoyed working with you! Many thanks for all that you do—we could not do what we do without you!